Utility Box Murals Highlight the Plight of the Alewife

What do alewife, art and utility boxes have in common? An unusual question for sure. The answer? The Avenue Concept.

What’s an alewife, you ask? It’s a small diadromous fish (migrating between fresh and saltwater) whose numbers were once so large that they would turn rivers silver during their migration to spawn. Sadly, the industrialization of Narragansett Bay and the rivers that flow into it greatly reduced their numbers.

In recent years, a concerted effort has been made to restore water flow and access to areas where alewife once traveled.

“Many people don’t know that the dredging of the Providence River and the building of the pedestrian bridge was done to help support the alewife’s great migration,” says Founder and Executive Director of The Avenue Concept, Yarrow Thorne.

Yarrow says that the idea to create art inspired by the alewife’s plight came from several sources. “I felt it was important to find a theme that had connections to people from many different backgrounds,” he says, “and the more I looked and the more I talked to people, the more connections and interest I found.” He continues.

Last year, The Avenue Concept launched Outside the Box, a program to promote emerging artists who painted 21 utility boxes in and around Providence. This year, artists were asked to submit their ideas for art inspired by the alewife.

Many of these utility boxes are located around Providence Innovation District Park, designated open space that was reclaimed back in 2011 as part of the relocation of Interstate 195. The Avenue Concept and the I-195 Redevelopment District have been looking for opportunities to collaborate for several years as both parties recognize this land to be an important piece of Rhode Island’s artscape.

“This land is one of the most popular and tracked parcels in Providence,” says Yarrow, “which makes it a great destination for public art.” he continues.

Caroline Skuncik, executive director of the I-195 Redevelopment District stated, “we value public art and its ability to enhance the quality of life for people who live, work, and visit the district and the park.” 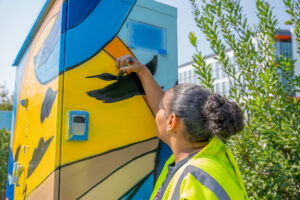 Shaena Soares working on her mural.

Shaena Soares, a utility box artist and member of the Narragansett tribe, says that she heard of alewife and how they were used to fertilize crops, but it wasn’t until she became part of this project that she realized just how interconnected the alewife was to the area and its history.

​​”I want to do something a little more abstract with more popping colors and contrast,” Shaena says.

Alejandra Lindstrom Peralta is another artist that was nominated for this project. She is also an art teacher at 360 High School. “The fertilizer aspect really stuck with me,” she says. As a gardener, she also is uses fish fertilizer and so wanted to create a mural that incorporated this aspect of the alewife.

Artist Savonnara Alexander Sok is another artist who is part of the project. He hadn’t worked with The Avenue Concept prior to this, but he had seen and heard about past projects. He is collaborating with another artist on a box. “I wanted to create a lot of flowing lines and create movement for the eyes,” he says, about his idea for a mural. 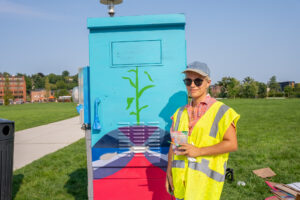 Alejandra Lindstrom Peralta next to her mural.

Artist Kiara Costa started selling art full-time during the pandemic. The Alewife MBTA station in Cambridge, Massachusetts, inspired her. “I wanted to keep it kind of funky, like a lot of my prior stuff; very colorful and playful.” “I didn’t want it to be too literal,” she says.

While the artwork has transformed a utilitarian object into something beautiful, this project is more than just that.

“It’s not about the art, but the story behind art and design and the artist’s perspective.” Says Yarrow. “I want the artist to feel ownership of the boxes and be excited to share the experience forward to support new artists and stories.” He continues.

It is also about connecting communities. “I want people to go see these boxes and connect them and their stories to the river and the land that surrounds them,” he says.  “Then connect that to their home no matter where it is and look for the connection.” He continues. 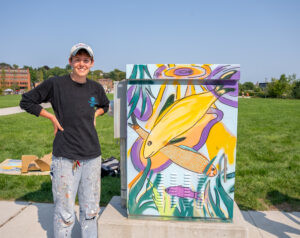 Natasha Brennan with her mural.

He says he has often seen the water in this area turn silver with fish. “It is magnificent,” he says.

Dan Goulet works for Rhode Island’s Coastal Resources Management Council (CRMC) and in part helped inspire the theme of the alewife. He is the infrastructure coordinator for the dredging of the Providence river and Providence Place. These are the areas that alewife pass through to and from the ocean. He says that he has often seen the water in this area turn silver with fish. “It is magnificent,” he says.

However, in recent years certain waterways around Providence have become impassable for even small fish. “It wasn’t navigable,” says Dan about the Providence Place, for both fish and boats. It was especially dangerous for the alewife, who could not make it through at low tide. Dan explained that they would sit in pools, waiting for the tide to come in and be slowly picked off by birds.

Thanks to a group push of businesses around Providence Place and WaterFire Providence, Dan and his team dredged the area in 2019. Over four feet down was dredged in the winter of 2019, but a lot of it has already filled back in. That is why another dredging is scheduled for October of this year and will continue until the end of January.

The utility boxes will stay painted until June 2024, when new artwork will be installed. We encourage you to go take a tour!