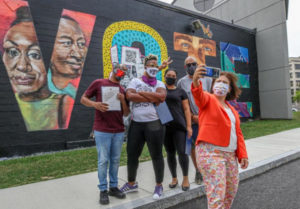 In the wake of the killing of George Floyd in summer of 2020, the streets of Downtown Providence were filled with art created by practicing artists and newcomers who looked to the sheets of plywood covering windows as a canvas for voice.

But plywood presents a temporary opportunity to paint and the idea for rotating human-scale mural canvases for BIPOC and women artists, some of whom had not worked extensively in public, became possible through a grant from the Rhode Island Foundation. The Avenue Concept worked with artists to produce 10 utility boxes to lead public art fans from Upper South Providence/West End through the Downtown Corridor and up College Hill to the RISD campus.

Mural Program Manager, Nick Platzer, developed the idea of having well-known local public artists act as artist ambassadors, bringing emerging public artists to work in new environments and spaces. Three artists were asked to be ambassadors, AGONZA, Kendel Joseph, and Jess Brown, and each artist ambassador chose artists whose work would stand out in the environment in which the utility boxes were located. Kendel Joseph selected Arthur Cayo, Laura Henderson, and Natural for their work Downtown. AGONZA selected Keira Gonsalves, Sara Breslin, and YSANEL for Upper South Providence and Jess Brown worked with students from ArTwerk, an interdisciplinary advance studio at RISD for the boxes on RISD campus. All three artist ambassadors were part of 2020’s VOTE mural, where they got to know one another. “Artists are often used to working alone so when there is a space where they get to meet up, learn from each other, share ideas and stories it becomes something even bigger,” said Platzer. “This project created a space for artists to recommend others whose potential they see in the public realm. It was a new way to think about the ripple of public art.”