Coming Soon to a Corner Near You: Announcing Our 2019 Public Sculpture Program

Since 2013, we’ve maintained nine sculpture pads throughout Downtown on which we’ve installed a rotating series of works from local, national and international artists. Over the past few years we’ve showcased works by artists from South Korea, South Africa, Peru and Bulgaria, but this year we decided to look closer to home. By putting out an open call to sculptors all over the Northeast, we not only have a chance to showcase the rich base of talent right in our own backyard, but we’re also able to bring the artists into town for a series of artist talks, enabling our audience to engage directly with the creators.

The response to our call was incredible, and our panel of experts selected the following four artists and works to be installed from July 11 to August 29. Here’s a sneak peek at who they are and what they do. The first was installed today, July 11, and is on view now. However, we’re not going to spoil the surprise by showing you the rest quite yet. You’re just going to have to wait until you can go Downtown and see them for yourself!

July 11: Collusion by Mike Hansel
Hansel is a Middletown, RI-based sculptor and arts educator whose work has been featured at exhibitions at the DeCordova Museum in Massachusetts, the Soho20 Gallery Chelsea in New York City, and at the Sculpt Miami event. Collusion is a stainless steel piece featuring four rigid forms that have the appearance of being flexible and lively, bound together by a fifth visual element to suggest that they are unified.
At LaSalle Square (corner of Empire and Sabin Streets) 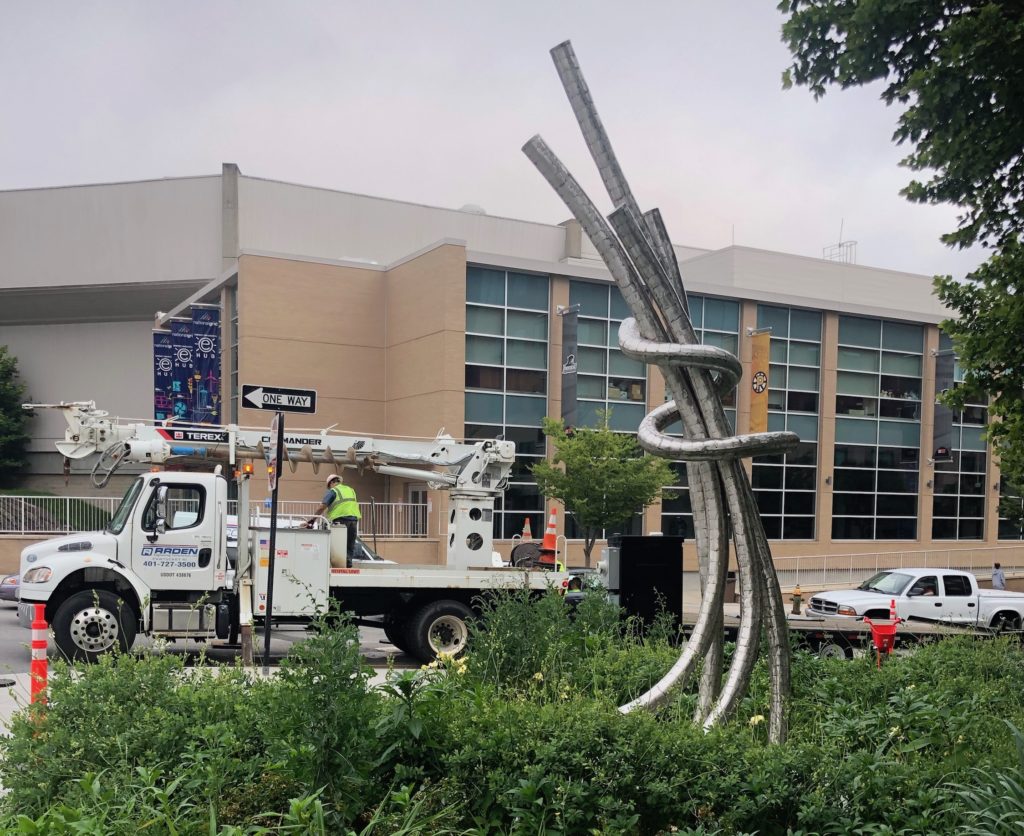 July 25: Hektor in Conversation by Gilbert Boro
Boro is based in Old Lyme, CT, where he runs Studio 80+ Sculpture Grounds, a collaborative work studio and 4.5-acre sculpture garden that is open to the public. His steel and granite sculpture is an artistic interpretation of Hektor, the Trojan warrior from The Iliad.
At corner of Exchange Terrace and Francis Street 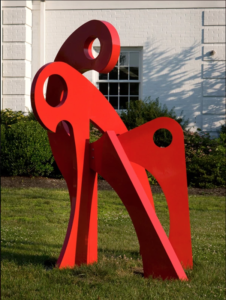 At corner of Fountain and Dorrance Streets 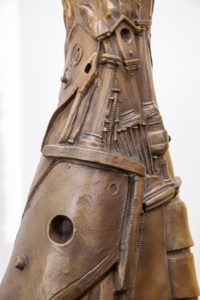 August 29: Cotyledon by David Boyajian
David Boyajian is an artist, art instructor, and the owner of David Boyajian Sculpture Studio in New Fairfield, CT. His work is featured at the 9/11 Living Memorial at Sherwood Island for the state of Connecticut. Cotyledon is a steel sculpture with powdercoat paint finish that focuses on the process of germination of a seed embryo.
At LaSalle Square (corner of Empire and Fountain Streets) 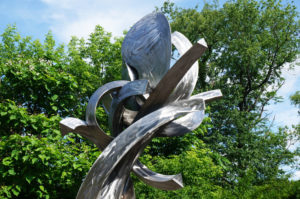 Each of the four sculpture installations will be followed by a FREE artist talk at The Avenue Concept headquarters, 304 Lockwood Street in Upper South Providence. Check our events page for schedule. These artist talks are free and open to the public.