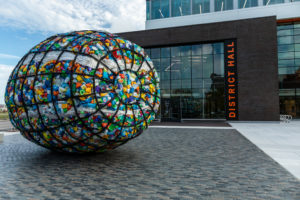 When internationally-renowned sculptor Steven Siegel created his site-specific monumental sculpture “Like a buoy, like a barrel” on the plaza at the Point225 innovation center in 2019, it was a big deal.

It was the first major work of public art in Providence’s newly re-christened Innovation District, sitting at one end of the new pedestrian bridge that connects the district to Fox Point and the base of College Hill on the other side of the Providence River. The large, colorful capsule welcomed visitors to the new innovation center, and represented a major investment in both art and the community on behalf of the center’s developer, Wexford Science + Technology.

“Like a buoy, like a barrel” also represented the culmination of nearly three years worth of work, not only by Siegel and Avenue staff like Sculpture Program Manager Brian Dowling, but by Avenue Concept Resident Artists Bonnie Combs and Jen Long, whose Operation #recyCLEAN collected dozens of cubic feet of single-use plastic and other raw materials for the artist to upcycle in the creation of his work. That work also involved countless members of the community – both individuals and businesses like Freeway Laundry, Save the Bay, DASH Bicycle and others – who contributed, collected and volunteered to clean and prep the materials before Siegel even arrived in Providence.

The vision was as large as the object itself. The sculpture was to remain on display for three years, and plans were in the works to find yet another purpose for the recyclable materials from which it was created after the work was de-installed. After installation, it quickly became a local landmark, embraced by passersby who appreciated its beauty and message, as well as the community that helped create it.

Sadly, the sculpture did not even last one full year. All of that work and all of those plans went up in flames – literally – on August 10, 2020 in an overnight fire that destroyed it. 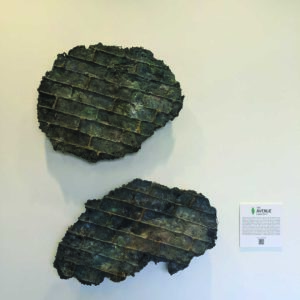 We mourned the loss of this work, but new inspiration rises from the ashes. Siegel’s work, particularly his site-specific sculptures like this one, is an iterative process and, in this case, it continues even after the destruction. As the fire burned, melted plastic from the sculpture dripped onto the plaza and was molded by the paver stones sitting beneath the original form. These new objects, the only physical remnant of the artwork, are on view now in the lobby of Point225.

If you look closely you can see some of the materials used to create the original sculpture: chicken wire, hints of bright color from the plastic containers, even charred carbon from the fire. It’s not what anyone involved in this project had in mind when it began, but it’s both a visually compelling artifact on its own and the next part of the story of this beloved artwork.

You can see this piece of local art history in person in the lobby at Point225. The building is located at 225 Dyer Street. Masks and other covid precautions are required for anyone entering the building.

Learn more about how our Resident Artists turned recycling into art

Understand the medium and message behind Siegel’s work

Read Avenue Concept founder/executive director Yarrow Thorne’s statement on the destruction of “Like a buoy, like a barrel”