These murals and sculptures aren't lectures – they're conversations.

Making public art happen is more than putting paint on walls or bolting sculptures onto pedestals. It’s an ongoing conversation between the artist, the art itself, the viewer, and the community in which the art lives. 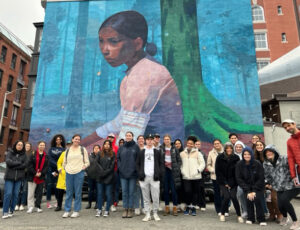 Some of our most iconic works are the results of these conversations. Los Angeles artist Andrew Hem’s 2017 mural “Misty Blue” is one such example. He arrived in Providence with an entirely different design in mind for the wall at 118 Orange Street. However, upon learning that Providence is home to a robust Cambodian community, Hem, the son of refugees from Cambodia’s brutal Khmer Rouge regime, completely reimagined his mural to reflect the culture he shares with many of our city’s residents. Working from a photo of a young girl he encountered in Cambodia, he set her against a dream-like forest full of trees and fireflies, resulting in the mural you see today.

Another product of that interplay between artist, culture and community is “Still Here,” the 2018 work by internationally acclaimed muralist Gaia. In this instance, the process of discovery was much more intentional: the artist worked with the Tomaquag Museum, an institution dedicated to documenting and preserving indigenous culture(s) in Rhode Island, as well as museum educator and artist Lynsea Montanari, who represents the younger generation of the Narragansett tribe, to develop a design that honors both the past and present of our state’s first peoples. (Read more…) 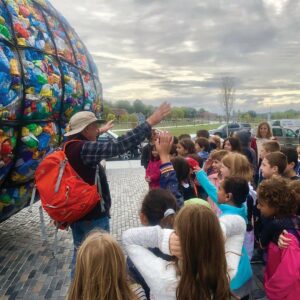 The interaction between public art and community can go beyond just inspiration or the stories being reflected in the work, however. Sometimes there can be more active participation. The monumental 2019 sculpture “Like a buoy, like a barrel” by New York-based artist Steven Siegel (which was sadly lost to a fire in 2020), was built from more than a year of collective effort on the part of local activists/artists Jen Long and Bonnie Combs, along with small businesses and the general public. Over the course of a two-part 3D residency program with The Avenue Concept, Long and Combs developed a program to collect dozens of cubic yards of raw materials from which Siegel would construct his sculpture, including single-use plastic, bicycle tire inner tubes and fishing net, many of which might otherwise have ended up in a landfill, or worse yet, the ocean. They engaged more than a dozen local businesses and institutions, which became collection sites, and countless individual Rhode Islanders who contributed materials. They even worked with teams of volunteers to clean, sort and prepare the raw materials for Siegel before his arrival. It was truly a work of art of, for, and by the community.

The experience is pure joy when members of the public join in to create the art. In April we launched a new partnership with Hot Club to transform the waterfront bar’s parking lot into a community-based work of public art. Working with artist Sav Hazard Chaney and community partner Dorcas International, we developed a colorful mural, entitled “United,” that shows solidarity with the Ukrainian people. It was painted with the help of volunteers from the community, including children. Now the community can enjoy this immersive public art experience while sipping a drink or having a snack at one of Hot Club’s picnic tables.

There are countless ways that public art and public participation can intermingle and benefit our communities, from beautifying utilitarian features of our urban landscape to welcoming children to school to reminding them to vote to honoring local activists to simply giving them a cool place to stop and take a selfie.

Public art happens when we – our organization, our artists, our community – all work together to create something magical. As one of our most recent projects, the 2021 mural “Salt Water” by the North Carolina muralist Garden of Journey, makes clear, it truly takes a village. And when public art happens, the whole village benefits. 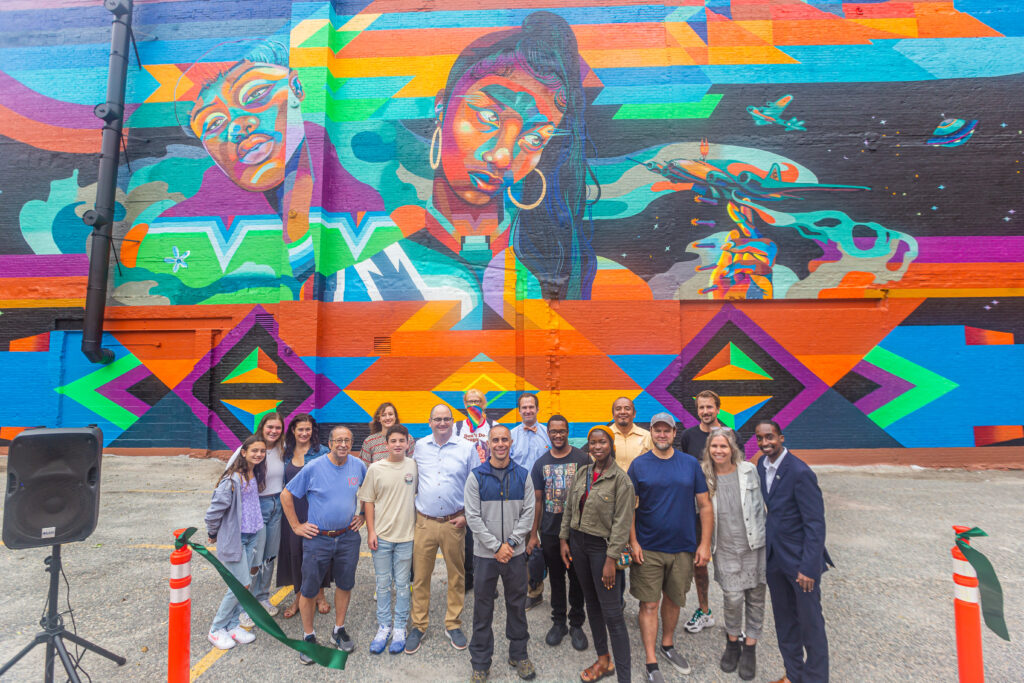